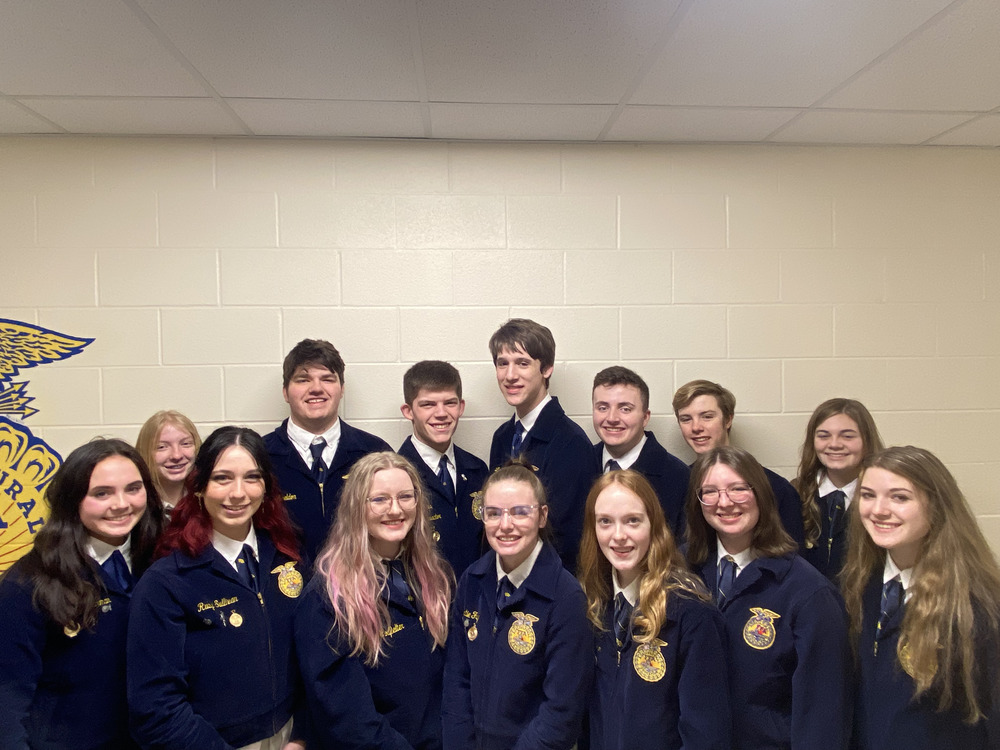 It was recently announced by the Indiana FFA Association that the North Putnam FFA Chapter won the Indiana FFA State Parliamentary Procedure contest, affectionately known as Parli.  The competition was held on Saturday, February 12th, at Lebanon High School.

The group from North Putnam High School have a lot to be proud of.  The students who are in grades 10th, 11th and 12th participated in the contest designed to introduce members to parliamentary procedure by conducting efficient meetings and building communication skills.  The group qualified to attend and compete at the state level after advancing out of the District and Section contests held earlier this year.  Some of the students on the team competed in the state Novice Conduct of Chapter Meeting contest where they won in 2019 and represented Indiana at the National FFA Convention and competed on the national level.

Miss Oxford commented after informing the students of their win, “We first introduced these kids to this contest when they were in middle school and it easily became their favorite contest.  Since winning at the novice level, they set a goal to win the state contest at the senior level.  Their hardwork and dedication paid off.  Their ability to put together an entire meeting in a short period of time not knowing what motions they will have or the judges will present is incredible.  Seeing the excitement from them as we told them they had won was one of the greatest experiences and something I won’t soon forget.  That is why we do what we do.”

The team from North Putnam is made up of Seth Ariens, Alaina Chew, Handley Everman, Shelby Hilton, Levi O’Neal, Brant Sheldon, Gabbi Simonson, Jayden Simpson, Olivia Stewart, Ruby Sullivan, Carter Thomas.  The alternate team members included: Grace Clodfelter, Katie Fry, Elle Jones, and Elizabeth Stone. The alternate team members played a critical role in the win.  The alternate members filled in for others during practices and were prepared in the event that team members were not able to participate at the contest.  Miss Janna Oxford is the lead North Putnam FFA Advisor for this team; however, NPHS FFA advisors Mrs. Kate Skirvin and Mrs. Heather Clingan assisted this team throughout preparation.

The objectives of the contest include: demonstrate correct use of FFA opening and closing ceremonies, demonstrate parliamentary procedure to conduct an orderly and efficient meeting, communicate and participate effectively as a team member, and demonstrate critical thinking and teamwork for effective decision making.

The contest format includes a written exam on parliamentary knowledge, FFA officer duties, official opening and closing ceremonies, agendas, and meeting minutes. During the contest, competitors were asked to assume various officer duties, including president and vice president, and were given one minute to prepare a scenario that was evaluated by a team of judges. A sixteen minute and thirty second maximum time period is used to demonstrate parliamentary knowledge of the assigned scenario. At the conclusion of the presentation judges ask one oral question (which may contain one to two parts) per participant. Oral questions are predetermined and related to the permissible motions, general purposes of parliamentary procedure or officer duties and responsibilities.  The students have no idea what motions they must present until they are handed the card and given one minute to look over it before the meeting begins.  There are six motions presented by the students and the judges present an additional two motions.

The team will be recognized this summer as part of the Indiana FFA Convention and will represent the state of Indiana at the National FFA Convention in Indianapolis in October. To learn more about the FFA Organization, visit www.ffa.org. North Putnam has a rich history of successful FFA alumni.  Potential students interested in learning about exciting opportunities within FFA at North Putnam are encouraged to contact FFA advisors Mrs. Kate Skirvin, Miss Janna Oxford, or Mrs. Heather Clingan.

Copyright © 2022 Central Office and School Board. All rights reserved. Powered By Apptegy